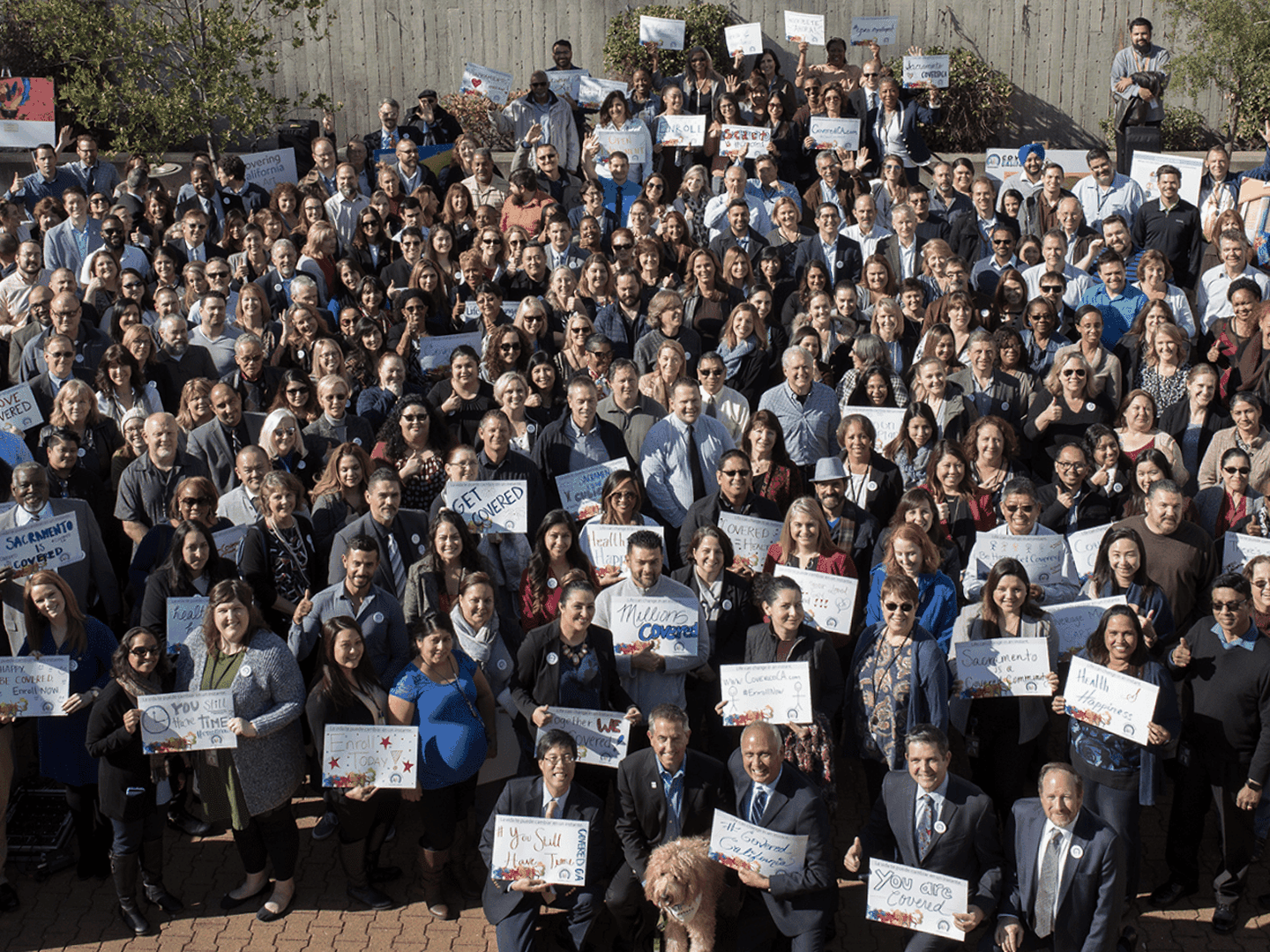 With the mission of increasing the number of insured Californians, improving healthcare quality, lowering costs, and reducing health disparities, Covered California believes it’s critical to ensure that the organization’s own workforce is built on a foundation of diversity, equity, and inclusion (DEI).

Though Covered California always prioritized the employee experience, it wasn’t until the most recent racial justice movement in the United States that they realized they could, and should, look deeper into engagement through a DEI lens to fully understand the employee experience. Peter Lee, Executive Director, Abigail (Abi) McEntee, Manager of Engagement and Inclusion with the Department’s Office of Organizational Culture, Inclusion, and Engagement, and the Senior Leadership team decided it was time to take a proactive and strategic approach to DEI and improve the employee experience for every individual.

A core element of Covered California’s mission is to address healthcare disparities and improve health equity. “Equity is literally written into our mission statement,” says Peter. “We serve a phenomenally diverse set of people, so a commitment to equity is baked into what we do.”

“We've always looked at the ethnic makeup of our staff at every level, and we do focus groups in different communities to help us understand our customers better,” he explains. “But if we don't retain, promote, and grow a diverse workforce, we won't be able to effectively deliver on our mission.”

Peter recognized that for Covered California to live by its own principles, the organization needed to take time to listen and reflect. Though they’d always run engagement surveys and taken feedback seriously, they hadn't fully connected those survey results with their diversity, equity, and inclusion efforts. Without that step, they didn’t have a way to understand, prioritize, and take action on DEI.

“We thought we'd been doing an okay job until we actually went out with a specific DEI survey that highlighted gaps we didn't even know we had,” says Peter. Covered California’s Senior Leadership quickly realized that meaningful change starts with a willingness to be vulnerable. They decided to take a proactive approach to uncovering and addressing disparities in the employee experience among different identity groups.

In her work on Covered California’s Office of Organizational Culture, Inclusion, and Engagement team, Abi manages the Culture Amp survey and resulting initiatives. Once leadership identified the need for a more comprehensive DEI strategy, Senior Leadership decided to form a DEI workgroup composed of 17 members from 13 divisions across the organization. Abi helped to develop and lead this working group.

The DEI workgroup started meeting in September 2020, and quickly recognized that they needed more data. Because Covered California is a state agency, there's not a lot of data transparency. When someone is hired by the state, they are asked to fill out a series of demographic questions – typically gender, race, and ethnicity – but the options are very limited. If any questions are left unanswered, HR is required by state law to choose something for them. This practice creates a lot of room for inaccuracy and bias – ie. if someone in HR makes an assumption about a new hire’s identity based on their name or physical appearance.

So, Covered California felt uncertain even about the data they did have. Further, the questions asked in the original hiring survey weren't in-depth enough for people to give a full and inclusive picture of their identity. “We’re never required to collect information about more nuanced demographic information like sexual orientation or caretaker status,” says Abi, “but we felt like that was important to understand the employee experience.”

In November 2020, they decided the best way to collect this data was through a DEI-specific survey. As Culture Amp customers who have been using the engagement survey for four years, Abi had confidence in using the Culture Amp platform to run the survey.

In the beginning, Covered California focused on selecting the right survey questions. “I started looking at Culture Amp’s templates and reaching out to other state agencies to see what they had done,” says Abi. Next, she compiled a list of questions and brought them to the DEI workgroup to discuss which questions to use and why.

From there, the survey questions were sent to the executive team, which had to decide how deeply they wanted to dive into the demographics. The DEI group wanted to collect as much demographic information as possible, and the executive team agreed. But to do so, Abi knew they’d have to set the survey up in a way that made people feel safe taking it.

Covered California employees were familiar with the Culture Amp platform, and Abi’s team had already built trust through their commitment to confidentiality and transparency. Employees knew where their responses were going, who would see them, and how they would be used.

Culture Amp enabled Abi’s team to create an unattributed survey, so no information (ie. name or email) would be preloaded. “We thought a lot about the language that we set people up with to ask these questions,” Abi explains. “All of our communications reinforced that this was an optional survey, and if you're not comfortable taking it, we understand.”

“This was an opportunity for people to share candidly with us,” Abi continues, “and we hoped that they would. We have always encouraged voices here, but this was a new type of voice we were asking about. We've never asked people about sensitive questions like how much voice they have in decision-making or if they feel safe in certain situations.”

From build to launch, the process took about two and a half months, with the survey launching in January 2021. After it closed, Abi and Peter decided to bring on Culture Amp’s people science team to help them dive deeper into their results, gain trust with their employees, communicate their learnings, and use what they learned to meet the needs of their diverse workforce.

The ability to slice and dice their survey results by various demographic data – not only by race, but also by age, by caregiver status, by LGBTQ* identity, and more – helped the Covered California team achieve a new level of thoughtfulness and sophistication. But part of being a data-rich and evidence-based organization is understanding when you need to reach out for help to interpret the data.

Covered California’s entire senior leadership team and the 17 member DEI workgroup had the opportunity to work with Culture Amp’s Director of People Science, Ken Matos, as part of our PS+ program, to dig into the data. Senior Leadership were provided with and spent time reviewing over 1000 written comments that supplemented the quantitative survey results.

Culture Amp’s expanded results interpretation trainings helped provide meaningful context around typical results, insights into how to present results in a way that acknowledges problems and motivates people to fix them, and suggestions on how to prioritize actions. “It was so helpful to have the people science team put our results in context with benchmarks to see how it compares to other similar organizations,” says Peter.

The Covered California team quickly found that talking through the findings with the people science team helped them understand the depth and richness of the data. This process also helped Abi, Peter, and their team avoid fixating on specific numbers and instead step back and look at the big picture. “We’ve been so impressed with the Culture Amp team,” Peter continues, “and are even more so after engaging them to help us think through these issues.”

As they started to see trends in the results, they identified discrepancies in employee sentiment among various identity groups. For example, the biggest non-white group of staff are Latinx, and this group showed positive sentiment comparable to White employees on questions that measured how involved, included, and engaged they felt. However, they saw a major drop-off in scores from Black employees and those that chose not to identify their race. “It was helpful to have that jump out at you,” says Peter. “And it helped to have the people scientists share ways to think about the non-respondents and identify areas to improve engagement.”

The Senior Leadership team made it a top priority to share the survey results with the rest of the organization in order to help build trust, credibility, and accountability. Peter invited Ken to give a brief presentation on the results to all Covered California staff at a meeting with over 1000 people. “I’m proud of our willingness and ability to both call out what's working and be vulnerable enough to share what’s not working and key problems,” says Peter. “We don't have all the answers, but we're going to engage together and try to address them.”

Six months after running the survey, Covered California has been empowered to better understand and take action to improve key employee pain points. “Overall, we see very positive general views of what we do, mission alignment, etc.” says Peter, “but it’s critical to step back to recognize key gaps and shortfalls to address.”

Since Covered California was founded, equity has been part of the organization’s mission as they strive to address healthcare disparities and promote health equity, but now, Peter feels that they are starting to embed DEI to a similar degree. “It's not enough to look at percentages of staff by ethnicity every year. We have to implement integrated programs throughout the organization, and we’re going to be using Culture Amp on an ongoing basis to get a pulse check on how we’re doing.”

Beyond engagement, this approach has impelled Covered California to start thinking about more ways to embed DEI across the employee experience. “As a direct result of the survey, we are working on a series of DEI and decision-making focused trainings that we plan to launch at the leadership and employee-wide level,” says Abi. “Additionally we’ve hired an outside consulting firm to help us develop a strategic DEI roadmap.”

Prior to using the Culture Amp platform to run employee engagement surveys, Abi’s team would spend hours compiling data in spreadsheets to analyze the results. “Our partnership with Culture Amp has saved our organization both time and money,” she states. “Culture Amp’s powerful platform completes much of that analysis on our behalf, which allows us to move from administering the survey to sharing the results and taking action on a much faster timeline.”

In leveraging Culture Amp’s resources and insights to take meaningful action, Covered California has been able to keep abreast of how staff are feeling in the midst of uncertainty and change – especially with the shift to remote work and a new emphasis on DEI. This has had a positive impact on engagement and contributed to higher retention across the organization, providing key cost-savings due to the amount they invest in training and onboarding. Abi says, “One of the main reasons Covered California is seen as an ‘employer of choice’ in state service is because of the robust engagement program that we continue to prioritize.”

Culture Amp’s people science offering has been a highlight in Covered California’s DEI engagement journey. “We’ve leaned on Culture Amp for everything from templates to our raw conversation about how we deal with racism at the ground level,” says Abi. “I lean on Culture Amp a lot for forward-thinking, and being able to continue to do so as we progress in this work is really important.”

Contact us today to get a demo of Culture Amp for your business.