5 questions for every CEO to ask their head of people

Five years ago, most of the conversations I was having with CEOs were about the capability of their people at a point in time. Today this conversation has shifted in a subtle but important way. Instead of focusing on capability as the competitive advantage, CEOs today focus on the growth rate (with my maths hat on, I think of this as the first derivative of people capability).

In other words, more CEOs are seeking competitive advantage through the organisation's ability to take people and grow them faster and better than anybody else. To help them achieve this, they're turning to their CHROs and asking them questions that dig a few layers deeper into their people and culture strategy than they have in the past.

I’ve listed below five questions that CEOs I admire are asking their CHROs now. In one way or another these all tie into the growth of people - they’re much deeper than just a current state or data point.

1. How inclusive is our company?

A 2021 Fortune/Deloitte CEO survey found, "94% of CEOs agreed that DEI was a personal strategic priority, 90% of CEOs agreed that their organization aspired to be an industry leader in DEI, and 72% of CEOs planned to disclose DEI metrics to the public." In other words, today's CEOs are asking how do I build a more diverse and more inclusive organization? Right now, there is an incredible amount of pressure coming from both society and boards for organizations to get this right.

When it comes to diversity and inclusion, CEOs sit in one of two camps. One group of CEOs is purely reactionary - they're worried about bad behaviour and reputational consequences. The other group of CEOs wants meaningful change. They've seen enough data to understand that it makes good business sense and know there's no way they're going to have a diverse company without first building an inclusive environment. So, they turn to their People and Culture leader to create that environment.

2. How engaged are our people?

Every CEO that I speak to is trying to do more with less. They've got to grow the top line, reduce costs and somehow find a gap in the middle to turn a profit and keep shareholders happy. Traditionally, CEOs achieve operating efficiencies by buying better equipment, negotiating better terms with suppliers, and financial engineering, but a lot of this has already been done. Now, the value in a business is not in the equipment; it's in people's heads. CEOs have to find a way to unlock that. So CEOs are looking for ways to take the people they've got and give them a reason to become an even better version of themselves.

Great CEOs know that engagement is a great way to measure whether they create an environment to get the best out of people. Core to engagement is understanding what it is about a company that makes people want to commit, get involved, unlock their creativity, and collaborate. Good CEOs realize this, so they're asking their CHROs, "How do we create a culture that engages our people to do more?"

3. What is the capability of our leaders and managers?

Managing people and culture is hard. It's about helping people grow and unlocking their potential. CEOs are asking where they can put focused energy to make the biggest difference to the largest number of people, and generally, that's their leaders and managers. If they want to create a different type of environment, leaders and managers are the people that have to grow fastest.

I was on a panel recently, and a Chief People Officer talked about some impact analysis he had done. His organisation had 800 people, 90 of whom were managers. He realized that if they could improve the capability of those 90 people, they could enhance the impact of all 800 people. When he dug into the detail, he realized that 30 of those managers looked after 60% of the people. By improving the capability of just 30 people, the potential impact across the whole organization was huge.

Manager and leadership capability is a foundational component for all of the things an organization is trying to do. Whether it's operating or financial improvements, it all hinges on having the right people in the right roles. I can't think of a CEO I've spoken to in the last year who is not worried about leadership development. They're concerned about how they're going to equip people to help others be successful and thrive.

4. What is the experience of our people at every point in their journey?

The fourth thing people ask when they're building amazing companies is: What experiences are people having at every point in their journey? Great companies are looking at the moments that matter and how they can manage and measure people's journeys. They want to design people's experiences at every stage.

This is a concept that people and culture have borrowed from marketing. On the consumer side, businesses have seen the power of journey mapping and understanding the experience that customers have. We now realize that there are pivotal points in the customer experience where you can create a wonderful experience. So we're borrowing that idea and starting to apply it to the employee journey. The result is a crafted employee experience from the moment an employee applies for a job to the time they decide to leave. 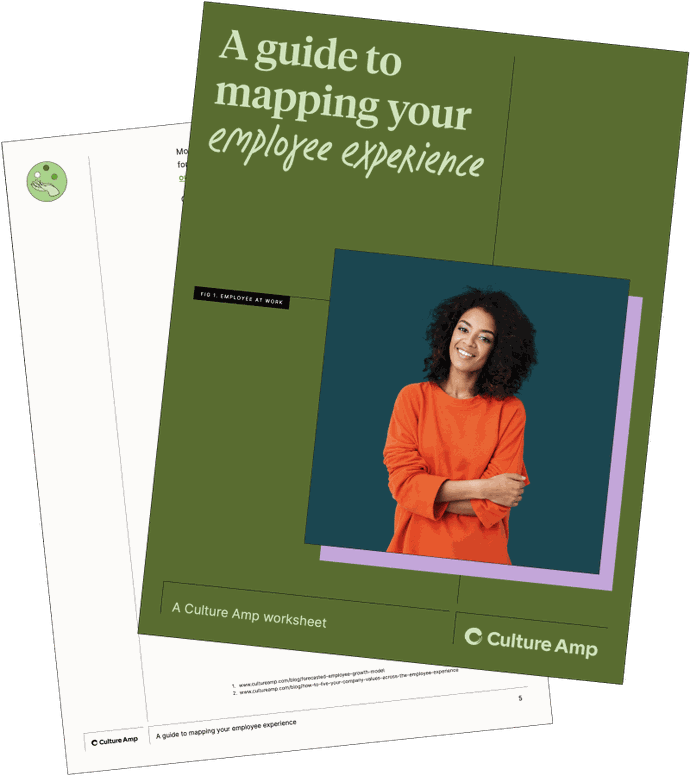 Amplify the moments that matter in your employee journey

Learn how to map your employee experience

5. What key initiatives are we shipping this quarter?

Finally, great CEOs are asking their heads of HR what key initiatives they're shipping this quarter. It sounds simple, but it's the language that's the shift. We're seeing companies starting to think about people and culture as the operating system of their company. They're looking at what things they can improve and what things they can build on and fix. Great HR leaders borrow ideas from engineering and design to give the organization confidence and visibility into what they're working on and how they're changing the company for the better. Good CEOs are also holding their head of HR to account for this.

There are so many things that a company could be doing, but if you try and run 20 change programs simultaneously, nothing will get done. Many great companies are very intentional in the way they do this. They may say, this quarter, we're looking at frontline manager training. We will roll out training to every office, get feedback and then improve the program and make it BAU. Then next quarter, they'll focus on something else. Communicating gives the organization clarity about what they're focusing on and holds them accountable to ship it.

We also see that something might not be perfect upfront, but they want to launch and approach in an agile manner. This is also a big shift in thinking. I heard one people leader the other day use "bug" terminology. They were running new organizational features in the company and would log any problems they found as a bug and fix it just like software teams do.

While the questions may be slightly different, these themes cross all industries. It's a significant change from how CEOs thought about people and culture even five years ago. Back then, the questions that were being asked were more static. How many people do we have? How many people are we trying to hire? Who are our high performers?

We see now that CEOs are still worried about the same metrics, but they're diving into those metrics and trying to figure out what's changing and why. The questions now go several layers deeper so that CEOs can understand how people will deliver a competitive advantage in the future.